Do you run a business with retail locations? 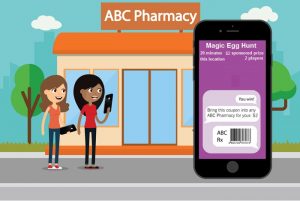 Let us build a special game that sends players to you in the real world.

“Augmented Reality” games work like Pokemon Go. You walk around in the real world, seeing creatures through your phone.

Augmented reality (AR) is a live direct or indirect view of a physical, real-world environment whose elements are augmented (or supplemented) by computer-generated sensory input such as sound, video, graphics or GPS data. It is related to a more general concept called mediated reality, in which a view of reality is modified (possibly even diminished rather than augmented) by a computer. As a result, the technology functions by enhancing one’s current perception of reality. By contrast, virtual reality replaces the real world with a simulated one. Augmentation is conventionally in real time and in semantic context with environmental elements, such as sports scores on TV during a match.

We can easily set up gameplay in the sponsored locations that you need. Players download a special purpose mobile app with a map that draws them to your locations. Then when they arrive, any number of gameplay situations can arise:

Players who win can receive a coupon that encourages them go enter your store and spend.